Earth was the one I first gravitated to. I visualized soil in earth tones, greys and black for rock, plus a vein of ore. I stitched using a wave technique in knitting and another wave technique in crochet, to mimic strata. I used mostly natural fibers, including a fair amount of handspun singles in wool, silk, camel, alpaca and blends. This piece is the largest and heaviest of the four.


For water I focused on the image of seawater. I used many fibers in aquas and let each motif swirl around the others to capture fluidity. Shiny yarns reflected the sheen at the surface, contrasting with dark tones of a deep pool. Lots of feathery yarns hinted at mysterious creatures hidden below.

For air I wanted a feeling of lightness. I selected blue, not to represent the sky, because a soft, cool color was needed. I loosely knit a series of shapes on large needles with thin wool, mohair and angora yarns. I then crocheted the pieces together with a brushed variegated wool. Holy and, well airy, this piece is feather-light.

I had trouble getting my fire going. I started something promising in yellow, but it fizzled out. I tried to rekindle that piece, but it was just not hot enough! I then started over, grabbing the traditional fire colors of reds accented with orange tones. I stitched using mostly textured and shiny novelty yarns - there are some mylar bits that fly away out of the piece like sparks. This element was stitched onto rug canvas, allowing me to work quickly and giving me lots of freedom to place each "flame" where I wanted. Some of these engulfed and distorted the edges of the canvas to create curves.

To get the effects I wanted for this set I not only had to pay close attention to color selection but I vary the stitching techniques. To emphasize the fundamental differences of each element I used a different free-form technique for each. 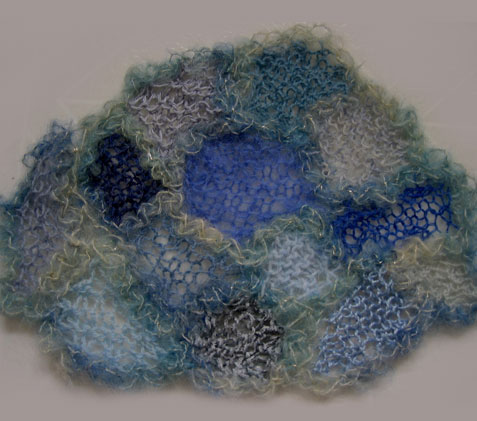 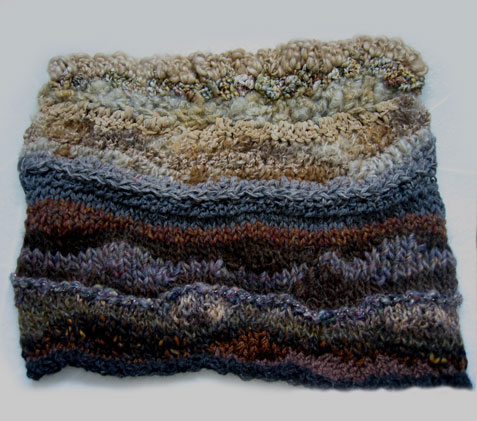 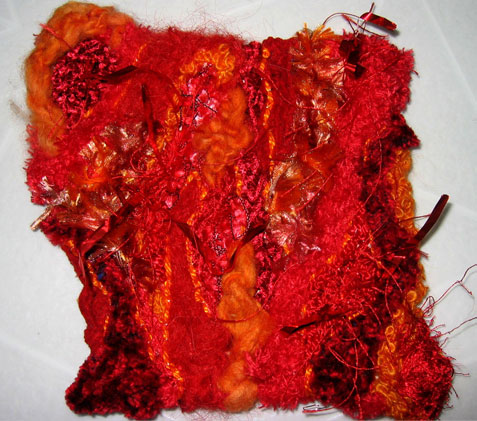 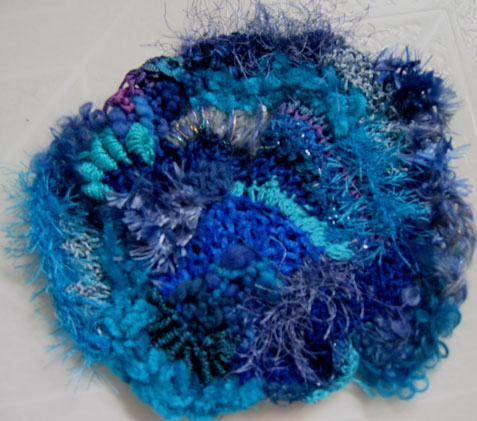